Can We Talk about “The Media”? 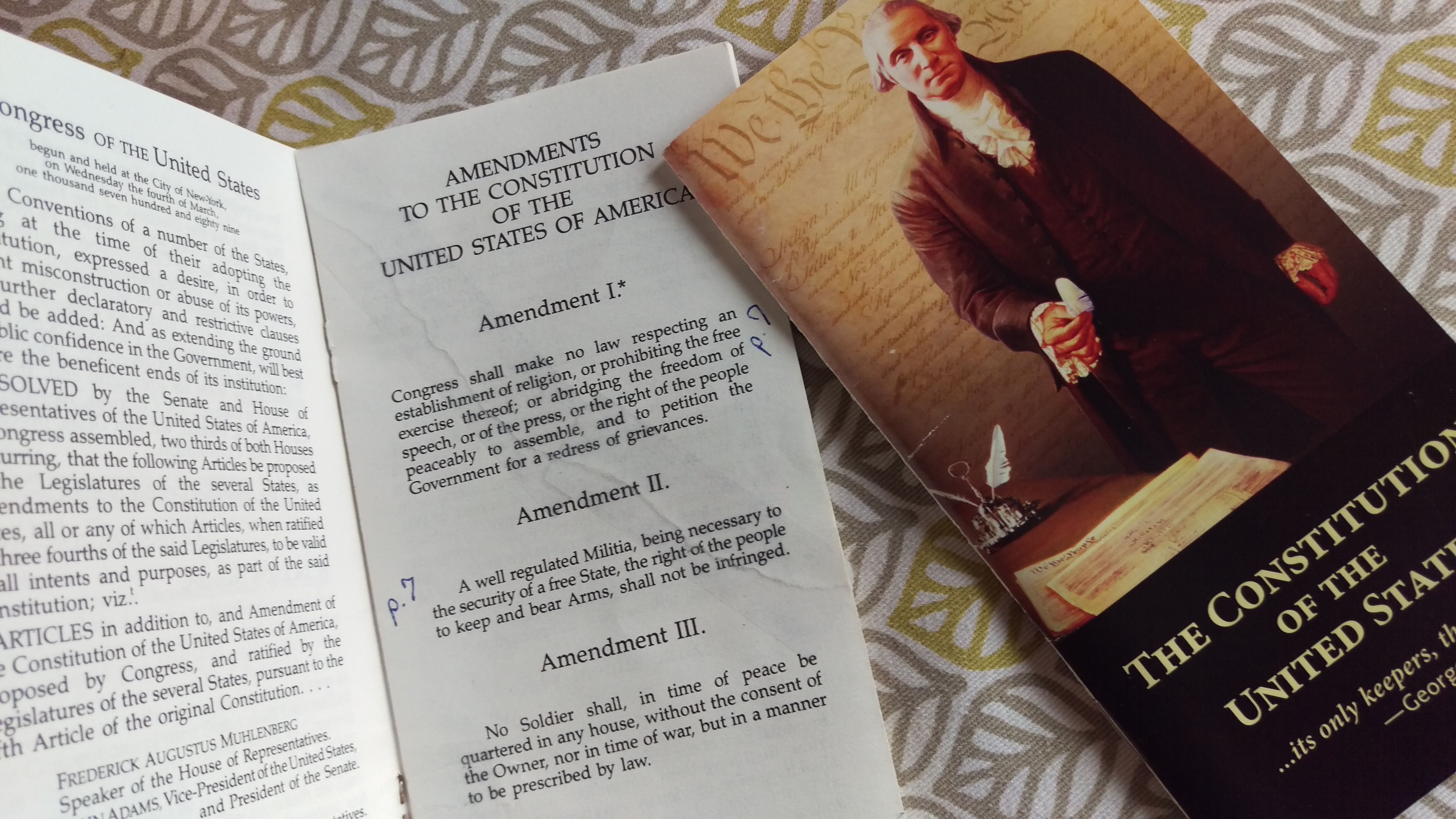 Journalists are equal parts cynic and rabid patriot. Most own a well-worn pocket Constitution. Ask them. I bet they’ll be able to tell you right where it sits on a shelf or in a drawer. They’ll have the First Amendment memorized and are liable to recite it to you, unsolicited, with more reverence than the Lord’s Prayer. They know a constitutionally protected representative democracy makes their jobs possible in the first place.

Reporters and journalists are employees working a job.

I was one.  And I studied law, ethics, American history, economics, sociology, even cults and statistics in order to get that degree and work that job. I’m not a political party. I’m a human. Pocket versions of the Bill of Rights and U.S. Constitution. I actually own two. Note the highlights and marginalia.

Any sweeping generalization you make about “journalists” includes me. (At least, it did when I reported in 2000 how Ameritech cited unseasonable June snow storms as an excuse for leaving elderly residents of Ohio with no working phone for weeks.*) Today, you’d include Gregory Korte trying to cover this completely wacky White House, Kevin Necessary spending six months illustrating visually the lives of an immigrant family living in Cincinnati, Rachel Dissell pressing for open records and shaming the city of Cleveland with the simple fact there is still a backlog of unprocessed rape kits! (This is me unabashedly name-dropping some much cooler former classmates and co-workers.)

Journalists work in media. But can we get clear about something?

“The media” is not ruining your country, though it feels like that sloppy claim keeps coming from all sides. “The Media” this. And “The Media” that. The media are “trying to divide us.” The media “aren’t telling the truth.” Even before the scandalous White House Correspondent’s Dinner earlier this year, I was begging to set the record straight:

“The Media” is not a thing.

I’d be taking a futile swipe at an old, dead horse to point out that noun is plural. Even the Associated Press style guide now accepts “the media” can serve as a single noun. And still the media are not a singular thing. There are a million kinds and variations.

The only blanket claim you can make about “the media” is that they are businesses trying to turn a profit, or in a few non-profit cases, to break even if they can. Their product is your eyeballs, your clicks, your shares, your minutes on their page. (Your subscriptions usually do not pay the bills. Think of that more as a co-pay for knowledge or entertainment.) They are selling your attention, to advertisers in most cases, and this was true even before our current digital age. Strategies, of course, vary. The Silicon Valley adage holds: If a product is free, you can be sure that you are the product.

Some media hold nobler views of their product than others and create it with varying degrees of virtue and commitment to the public good.

But “the media” and journalism are not the same thing. The “media” include everything from Fox News and CNN to NPR and Democracy Now to your local paper to the podcast you listen to and the online articles you read to TIME magazine and the underground ‘zine. “Media” include Roxane Gay’s powerful “Unruly Bodies” channel on Medium and Tomi Lahren’s Twitter feed (help us, Jesus). All cable news classifies as “media,” but whether it swings right or left, the majority of us sort it into the box of occasionally misleading and sometimes dangerous entertainment rather than journalism.

But you aren’t left defenseless in a cosmic flood of information with no compass to sort out fact from fiction, propaganda from public relations spin.

Allow me to introduce you to:  Your local journalist.

I realize it feels like they’re nearing extinction. (Kudos those trying to create an AmeriCorps for journalism)

Many are still working today, and very hard. Their basic agenda remains the same: to ask who, what, where, when, why and how something happened or will — and to verify the answers as best they can from multiple reliable sources.

Journalism is how we know sitting President Richard Nixon broke the law and were able to remove him. Journalism is how we found out Flint’s water levels were poisoning children, but the State of Michigan was saving a few bucks so the politicos didn’t mind. Journalism is what finally dislodged a backlog of rape kits when a city’s inability to see and believe women allowed Anthony Sowell’s horror house to exist as long as it did.

The Sinclair media scandal showed with disturbing clarity how unaccountable corporate ownership of news outlets means bad news for citizens. Tyrants always discredit or buy out the press. That’s why a good journalist will decline to accept as much as a free mug from a source.

Reporters are people, fallible and finite human beings, your family and neighbors, doing a job that can help you. You can help them, too. Here are my five suggestions:

More than anything, please stop using “the media” or “journalists” as class-action pejoratives. Because you’re talking about me, your daughter, your sister, your neighbor, your niece, your pastor. (Okay that last one is rare, but Venn diagrams comparing clergy and journalism careers might surprise you.)

Journalism has always been dangerous. But I used to believe that true only in other countries.

This past year, my own extended family — people who supported my degree, celebrated my first job, congratulated my past reporting successes — shared memes declaring that journalists are trying to destroy our democracy and linked to faux news sites hawking t-shirts that suggest my political orientation is a disease. I don’t think they meant to hurt me, personally. But that’s what this anti-journalist rhetoric does over time.

An entire room of hardworking U.S. journalists got killed earlier this year. That’s why I’m making this plea personal: When you state or share something that begins with “the media,” take great care. Please don’t forget your humanity. Or mine.

*I’d link to these, but the old articles are no longer archived by the newspaper online